The Death of a Salesman Blog Series

I went to see Death of a Salesman at the Young Vic recently. It had a strong cast of leads with Wendell Pierce and Sharon D. Clarke as Willy and Linda Loman, alongside Martins Imhangbe and Arinze Kene as Happy and Biff, their sons.

It is one of Arthur Miller’s most famous plays and as the play opens we see a tired Willy returning to his wife after an unproductive sales trip on the road.

His wife knows he is beyond tired and starting to hallucinate and talk to people from his past. She wants him to ask his boss if he can stop repping on the road and get a job out of the New York office not far from where they live in Brooklyn.

All the while Willy is struggling to come to terms with the fact his eldest son has made nothing of his early promise in American Football and is scraping a living as a farm hand. Whilst his womanising younger son Happy exhibits the self-importance and blind servitude of his father in his work as an assistant to an assistant buyer in a department store.

We never know what Willy sells, what we do know is that he has been moved to commission only selling, and things are getting desperate in 1948 in post war America.

He is feeling that he is owed something due to the years of effort he has put in.

Willy is an average performer who has stayed too long in the same job.  The fact that the firm moved him to commission only sales at his age was their way of telling him something without actually saying it.

Salespeople at their best are performers, inspirers, entertainers, motivators and storytellers.  Their love of language and skilled human interaction goes far beyond the understanding of many of the people they sell to. They love to reminisce about human encounters that rewarded their ‘performance and commitment’.

It is a great thing to have an ego and believe you are bigger in the minds and hearts of your clients that you actually are, but only to a degree. People move on and Willy didn’t. 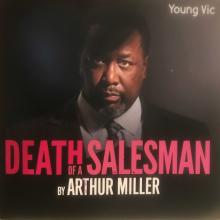